Hard to believe that I haven't posted in almost 2 years.  Certainly was never my intention to be gone so long.   But, life happened and things got busy.   However bad I am at writing, the knitting needles don't stop moving, however.    When the pandemic hit in the spring, I felt an overwhelming urge to knit blankets.  Probably to build a fort in which to hide.  But it seemed like a good way to whittle down some of the vast stash of scrap yarn as well.    And having just finished two of them, I need to share them with the world: 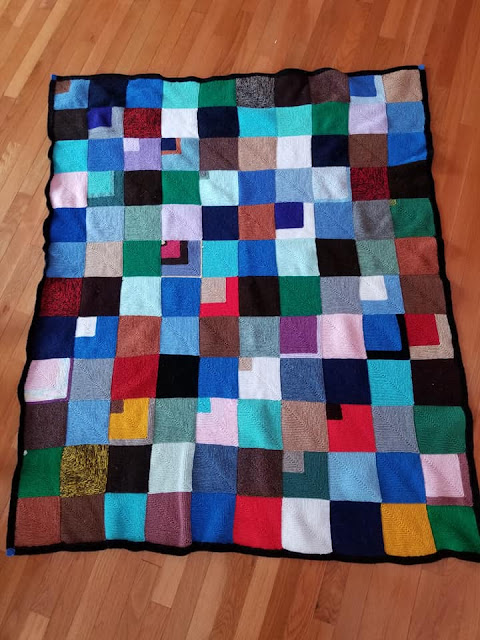 And the second one is a Ten Stitch Blanket, which has basically wiped out my supply of  bulky weight yarn.   Of course now that I've done one of these in scrap yarn, I'm starting to get the itch to see what it would look like in a variegated or gradient yarn! 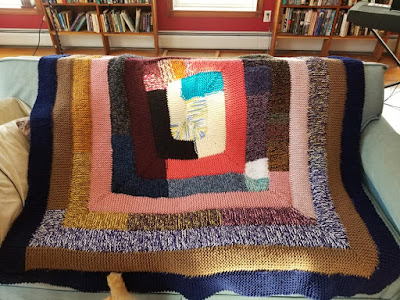 After that- no doubt because I've spent the last 8 months working on 2 projects (probably a new low for me!), I started making mittens at all possible speed.  Here's the past week's output. 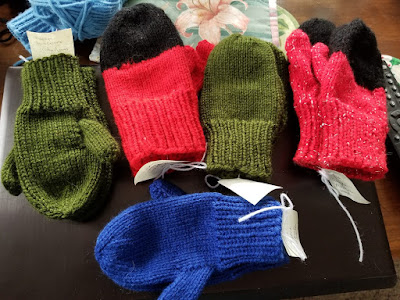 It's been a rough year for everyone.  I hope that others have found the same solace in yarn that I have.  Hopefully by this time next year, we'll all be experiencing something closer to normal.

January, In a Blur

So far, the whole resolution thing isn't getting off to a good start.  On the plus side, there has been knitting, and whole lot of other fun.

First the mini-mania scarf I cast on over the holidays, for social knitting.   This came about because at the last charity knitting meetup in November, a young woman showed up with bags and bags and more bags of yarn.  She explained that she had been part of a college based knitting group, and when all the out of area students headed away after graduation, they destashed and asked her to find a home for the yarn.  There was a lot of it, and much was very nice.  So I was able to restock my depleted worsted weight stash as well as getting a bunch of other fun yarns.  Including a bag of mini-skeins.  I paired them up with an odd skein of fingering weight, and started another linen stitch scarf: 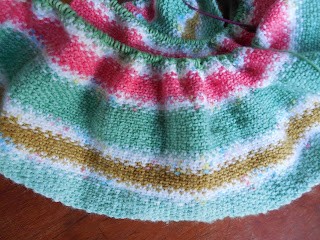 I'm just past the halfway mark, and was ripe for distraction, so I started switching off with some fast motivational charity knits: 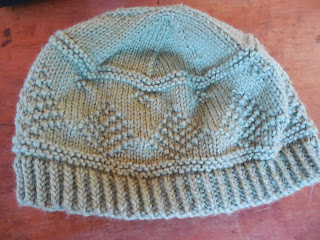 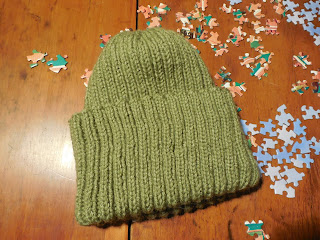 These are both the same yarn, incidentally.   The second one is closer to the true color.

Then a local knitter sent out the call for preemie hats for a local NICU.   These teeny little hats are like potato chips.  It's impossible to stop with just one. 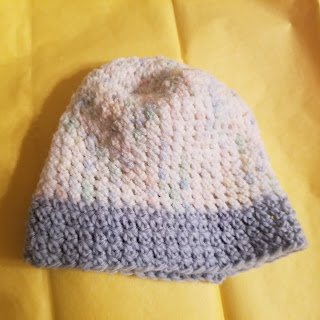 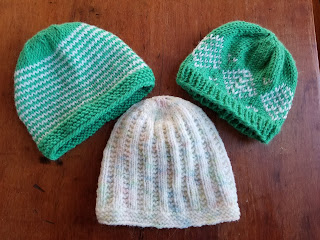 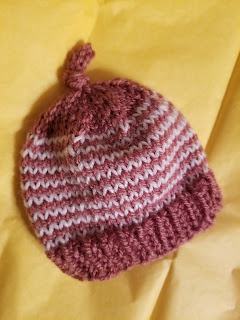 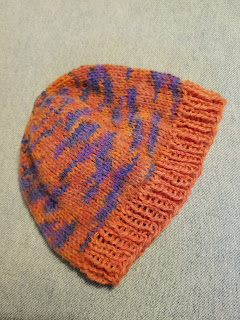 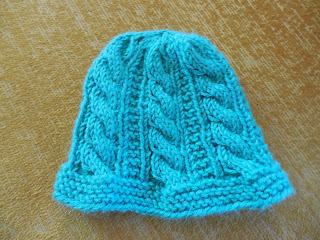 Yous see what I mean?  Crack is less addictive.  I feel sure there will be a few more of these falling off the needles before the streak burns itself out.

Just for variety, I switched back to the green worsted for another hat and mittens set.  A bunch of it was triple wound and knit into a partial sweater so I rewound it back into single strands.  Biscuit helped. 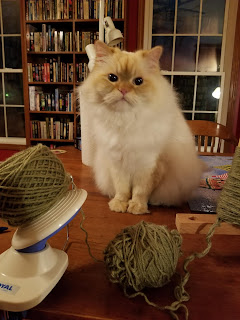 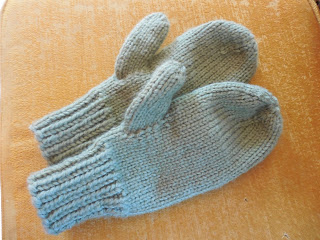 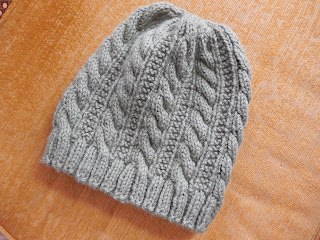 Of course to get this kind of knitting done, there had to be some compatible other activities- I knit at the Boston Celtic Music Festival. 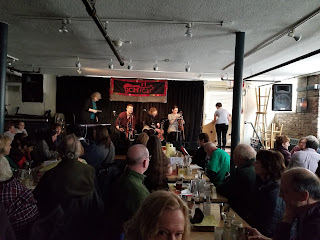 I knit while playing board games.  (I lost, but that wasn't the fault of the knitting.  My opponents were wily.  The game is Power Grid, the UK map, for the curious.) 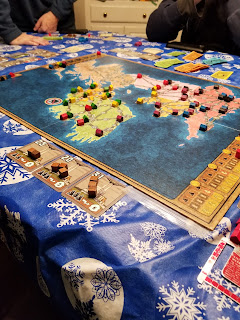 And I knit in the car while my husband drove us back and forth to all these, plus to the annual Amherst Railway Society show.   This year they had 9.3 acres of models- 400,000 square feet of floor space.   It was impressive. 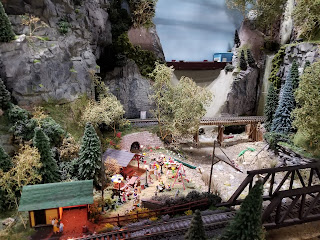 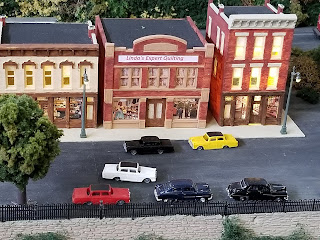 (Mom, look, the layout had a quilt store!) 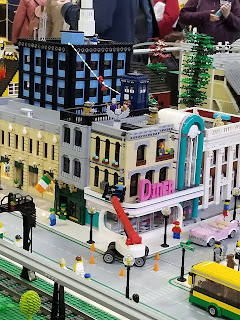 The LEGO layout featured a Dalek, the Doctor's police box, and Batman, among many others.

So, now it's February, and we have whole new slate of diversions planned to distract us from the gray weather.  I'll be back to tell you all about it someday soon.

One week into the new year, and I'm doing that thing where we look back.    It's been a busy year- some family things, some travel.  Knitting has been on the light side-just over 30 projects.  And despite the number, that's a lot less knitting than usual- mostly hats and mittens, only 2 pairs of socks.   Of the things on my master project list, I didn't complete anything.

Reading on the other hand, has been more intense.  I read 242 new books this year- there were some rereads as well, though I didn't count all of them.     And I have finished another book every day in 2019 so far, though I can't possibly maintain that much longer!  Not while working, and once I finish off the several remaining half-finished books I have in process.

One thing I have noticed, is that I've missed writing about crafts and keeping up with my online crafting friends- I want to try and do better this year.    And speaking of crafting, here are the last projects for 2018.    There were of course kid mittens: 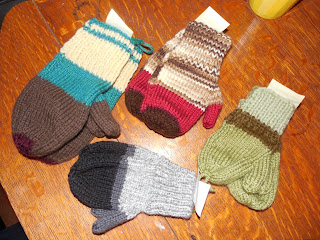 I started out to make a hat with this chunky yarn, but ran out with a short cowl. 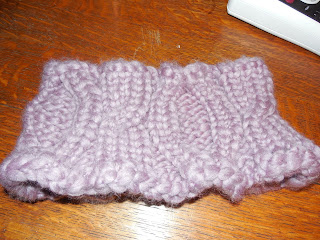 A last pair of adult mittens: 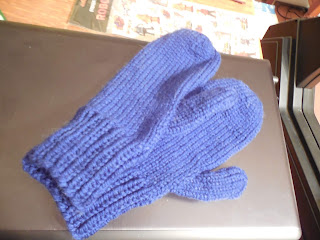 A Wurm hat- I've wanted to try this pattern for a while, but hadn't gotten around to it...then I happened to glance at it and noticed that it's written for sport weight yarn.  Of which I have a great deal...I'm sensing there may be some more of these in my future. 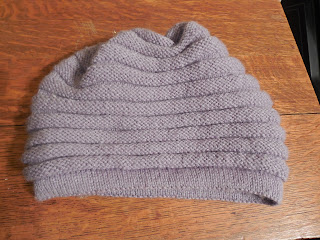 Speaking of sport weight yarn, I made another colowork hat, again with the aim of using up sport weight yarn.  The sport weight is too light for a single layer to be really warm - the Wurm pattern uses ribs to trap air for additional insulation.   But there are other ways- colorwork adds an extra layer of yarn for a warmer hat.  And it's higher resolution- the extra stitches required by the thinner yarn provides a suitable canvas for more intricate designs.  (This one came out of my Fair Isle stitch dictionary.) 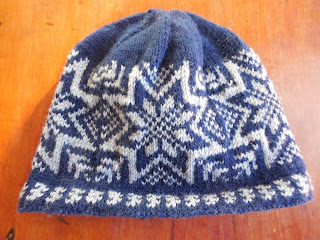 And last but not least- Christmas socks.  Yet another pair of Sagittarius socks, a pattern I've knit before but always enjoy.  I didn't have a chance to photograph these in natural light, but the yarn is pale green with a subtle copper sparkle.  Very pretty. 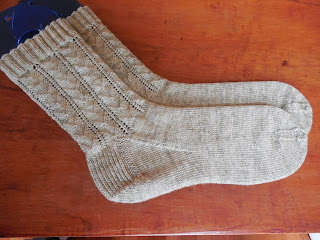 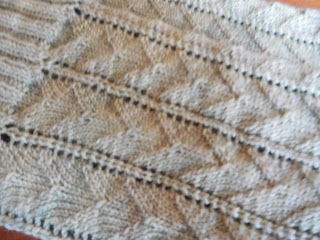 Due to some last minute scheduling changes, I knit the second sock in three days flat- good thing it was a long weekend heading into the holiday!

Just before the holidays, I cast on another Mini-Mania scarf for social knitting -also to use up a bag of mini-skeins that wandered into my stash- but that's a story for another day, when I have a photo of the scarf in question to show you.
Posted by RobinH at 9:29 PM 3 comments: